For the first time in many years the last starting crew rowed through the field to win the Plum Puddings* race. Drafting in Messrs Findlay and Meaney the Quintin Senior 1 VIII led the field in the annual dash back to the club. Second place went to a very pacy mixed VIII stroked by Ian Roots.

All in all it was a cracking race - well organised once again by John Peters whose seedings set up a 6 to 7 length blanket for the whole field at one stage.

Thanks also to Graham Lloyd for safety marshalling between the two Kew Bridges and Kim for an excellent lunch.

* Following a disqualification of Cygnet's Senior 2 VIII for what was deemed "an absence of Christmas Spirit or fairplay" in starting out of order and impeding others.

All three QBC entrants carried off the win in their event - Malcolm Cook, Dick Findlay and Hugh Davy picking up Vet D, F and H singles.

Congratulations to Jim and Ebbe Naylor

On the birth of their daughter Jospehine.

Bright Results on an Inclement Day - The 2004 Scullers' Head

Saturday 20th November saw a cold Scullers Head. The Quintin scullers notched up some impressive results reflecting the work put in by the sculling group over the autumn months.

Runners V Rowers Dart Evening 18th November.The format was 301 singles - the high standard led to the finish being based on nearest the bull rather than waiting on a double.

The runners dominated the final. 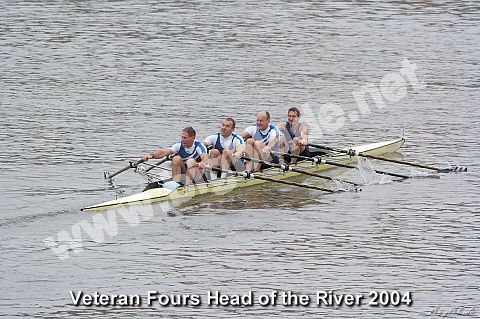 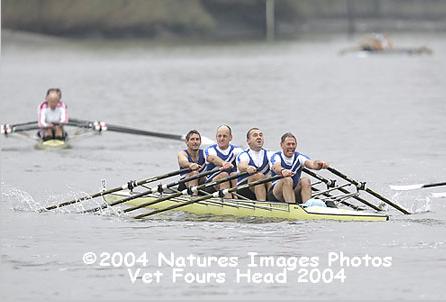 David Ford takes over the helm as Captain

David Ford was elected as Captain on Saturday 25th September. Assisting David will be his two vice-captains Martin Carr and Peter Meaney.

David has been at Quintin for his entire adult rowing career and was a Quintin Junior. Watch this space for his plans.

On the 19th September there was a boat naming hosted by Roy Davies conducting his last official duties as captain. The boats named were the "Kevin 'Lofty' O'Shea" - a Janousek coxed four; the "Hugh Davy" and the "Charlie Madge" - two matched Aylings AX2 pair / doubles.

A large turnout from Kevin's family made for a splendid day, the excitement of the scratch VIIIs being just the sort of good humoured Tideway racing Lofty loved.

Hugh Davy and Charlie Madge have very long associations with the club and were neighbours on Hartington Road in their school years.

There will be no further updates, as the pollution levels appear to be within the range that is normal for the time of year.

When going out on the river please continue with your risk assessment as is your normal procedure before all outings, being mindful of the need to wash down all equipment and footwear thoroughly after each use.

Following the ARA advice that each club make its own safety assessment the Club Safety Officer, David Ford, has stated that crews and non-novice scullers are allowed out on the water.

Boats (and athletes!) should be cleaned well afterwards.

The Senior Squad picked up some Senior 1 wins this weekend - the coxed four winning on both days. On the Sunday Mark and Ewan jumped into a pair and won S1 pairs. Following assorted barbecues / curries the Saturday night party saw a large QBC presence at the bar. Neil Spartacus Jessop being the star performer this year impressing the girls from Minerva Bath with his Bactrian knowledge.

The S1 VIII had a disappointing row against a Stourport / Hereford composite crew, clashing whilst leading.

Benie Dionori added a rowing win to her two coxing pots jumping into the Mortlake VIII.

Dov Ohrenstein picked up S4 singles on the Saturday coming through a massive field to defeat Quintin's own Richard Ratcliffe in the final. Graham beat Tom Edwards of Stourport (the father of former QBC Vice Captain Richard Edwards). Malcolm won his 10th pot on the Sunday at Stourport Sprint Regatta.

Malcolm Cook picked up another win in his single and the Women's Four won their Novice pots beating Barnes Bridge Ladies in the final from an 8 boat field.

This qualifying win for John Peter's Women's squad has proved very popular at the club - Graham Lloyd the Gambrinus Empacher agent is laying on two cases of the Czech Republic's finest ale to celebrate following boat unloading on Monday night.

Following QBC's many visits to Berlin it was good to be able to repay the hospitality and get two visiting Junior rowers, Udo and Lutz Shallopp, on the water with Mark Chatwin and Richard White. The two lads (15 and 17) are heading back armed with new Quintin kit. Their parents Bernhard and Elisabeth managed to get stuck into a few beers in Bar Quintin on this flying visit.

Their next trip is a 340km touring row from Berlin to Hamburg.

Malcolm continued his winning run to stretch his lead in the Pot Winners table with some fine sculling on a sunny afternoon in Staines.

The Wyfold four beat Staines in the semi-final and lost to a Molesey / Burway / Nottingham University composite. DUncan Haynes does seem to attract races against his former clubmates.

The coxed four of Jim, Kenny, Dave and Fraser dead heated against Thames then lost the re-row on the outside of the Laleham bend at the finish having led by a length going past the commentary point.

Malcolm continued his winning run to stretch his lead in the Pot Winners table. Graham put together a IV+ with Dick Findlay, Roger Hine and Geoff Peel to give Sarah Gardiner her maiden QBC win. The womens novice four went out to Barnes Bridge and the coxless four lost to Molesey in the final of Senior 1 fours.

The J15 double of Luke Dillon and Jonathan Martin-Thomas had an impressive win in their debut under Quintin colours at Kingston. Surprisingly, Luke and Jonathan have been concentrating on sweep oar at school this year. 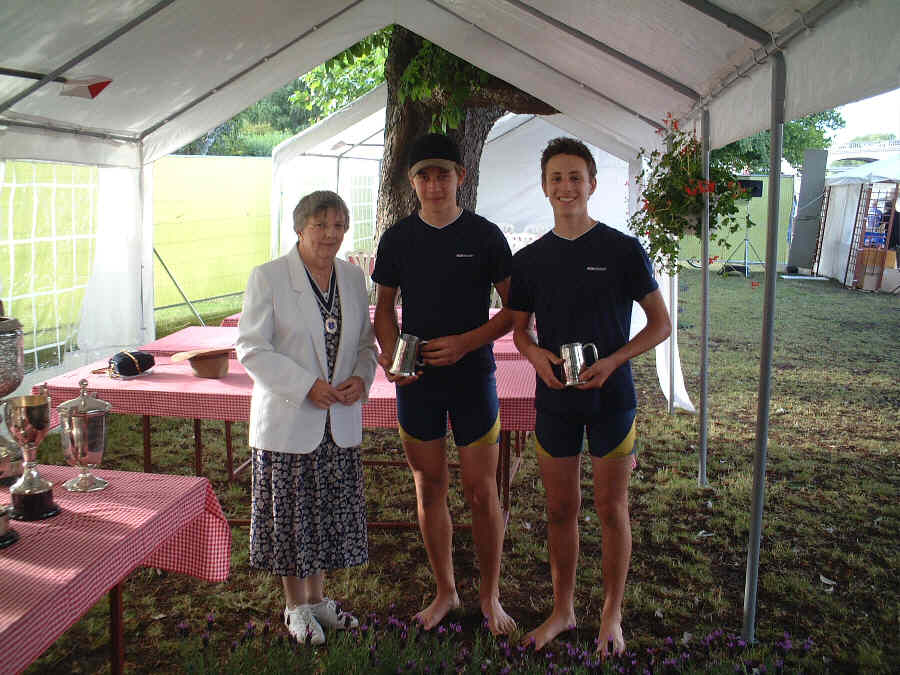 New to single sculling competition, Atashroo, raced the trees in his first heat, winning through to the final in an impressive display in the repechage before coming second in the final to Wedlake of Walton RC.

The J15 quad fought through the repechage to reach the final where they showed some true Quintin spirit by sprinting off the start into an early lead against the eventual winners from Latymer Upper School.

The new Junior Squad are racing as Quintin on the Saturday regatta in J15 Coxed Quads, J15 Doubles and J15 Singles. Let's hope for a large turnout to cheer them on in their first regatta for the club.

Malcolm Cook is also racing there on Saturday and the Women are doing the Sunday regatta.

The provisional times of racing will be posted on the HRR website.

Another win for Malcolm Cook in Vet D 1x - Malcolm now regains the top of the pot winner chart.

Oakley are giving consideration to developing a range of titanium Alice bands for Mr Haynes - they will be dubbed the TT range to match their other hair products.

The Thames Cup VIII have pre-qualified for the regatta following a strong showing at Marlow Amateur Regatta (results here).

The Wyfold Four have to qualify on Friday 25th June. The four are in the second division of crews (it is run alphabetically) going off at 5:05pm. All support is welcomed.

The Vet Quad of Dick Findlay, Charlie Harrison, Pete Meaney and Nick Ryan raced at Nottingham this weekend winning Vet C and Vet D quads. The quad put in the same time as the Vet B VIIIs winners and the only crews faster than them on the day were the Senior 1 VIIIs competing at Loughborough Regatta.

This result reflects the miles the crew did in the winter and on the club training camp in Aiguebelette. The crew have been the most consistent crew in Quintin this year and are organised by Pete Meaney.

The advice of the Enforcer (Dick Findlay) "Don't go all the way to Peterborough if you're not going to win." Well Malcolm went and he came back with two wins in D/E and C/D to top the Pot Winners Chart.

The QBC Women's IV+ raced at Walton disposing of Staines before going down to an impressive Staines A crew in the final. Their next regatta is Barnes & Mortlake.

Restored to the main navigation at Dick Findlay's behest

Saturday at the Met

The coxless four raced well at the Met losing to a good London crew and a Leander four.

The Senior Crews are now gearing up for the Met and the Supervets are building towards the National Vets. Quintin sees the welcome return to the fold of Duncan Haynes after his winter sojourn at Molesey.

Mark Chatwin ran away with the trophy - results here.

Training Camp Sunday 2nd May to Sunday 9th May

This will be our 4th visit to Aiguebelette staying at the Novalaise Plage hotel and racing in the Regate de Savoie.

Nick Ryan, racing Vet B, was our top placed sculler coming 16th overall and was the 5th single home in a time of 20:14 (handicap adjusted to 20:01). Charlie Harrison was the second QBC sculler home in a time of 20:23 (handicap adjusted to 19:37). Dick Findlay's time (Vet F)of 21:17 was adjusted to 17:59. If nothing else discsussion on the adjusted times will keep everyone amused around the table in Aiguebelette. Malcolm Cook won Vet D in 21.29 gaining an adjusted time of 19:50. The organiser of the Vet Quad, Pete Meaney, was a non-starter, allegedly keeping his powder dry till the training camp.

The news that has shocked the Tideway - Jim Naylor was seen to be smiling after racing past Sons in the curtailed Vets head. QBC 1 raced to 5th overall keeping the rate at a stately 37 all the way. The crew had their first outings in the VIII on the Thursday before the Heads.

Women's Head of the River

A big WELL DONE go's to the 1st Quintin Womans Eight who finished just outside the top 200 and a very credible 5th placed Novice crew. Well done to John Peters who once again has weaved some magic and come up with a crew to be proud of and who now have something to build on through the season.

This Pathe newsreel shows Bill Barry assembling a crew of "tradesmen" to take on the cream of British rowing and challenge for Olympic selection. Bert Barry was World Professional Sculling Champion from 1927 to 1930 (thanks to Malcolm Cook for the info). The strokeman appears to have been nabbed from Crowland (a founding club for the Lea RC). The crew are Quintin rowing with the old vertical stripes on the blades. Check out the Newreel link on the site. This footage was supplied by Liz Wray and Martin Carr.